Wages rising by 8.3% pa - how will this affect the Fife property market? (4 min read) - Fife Properties 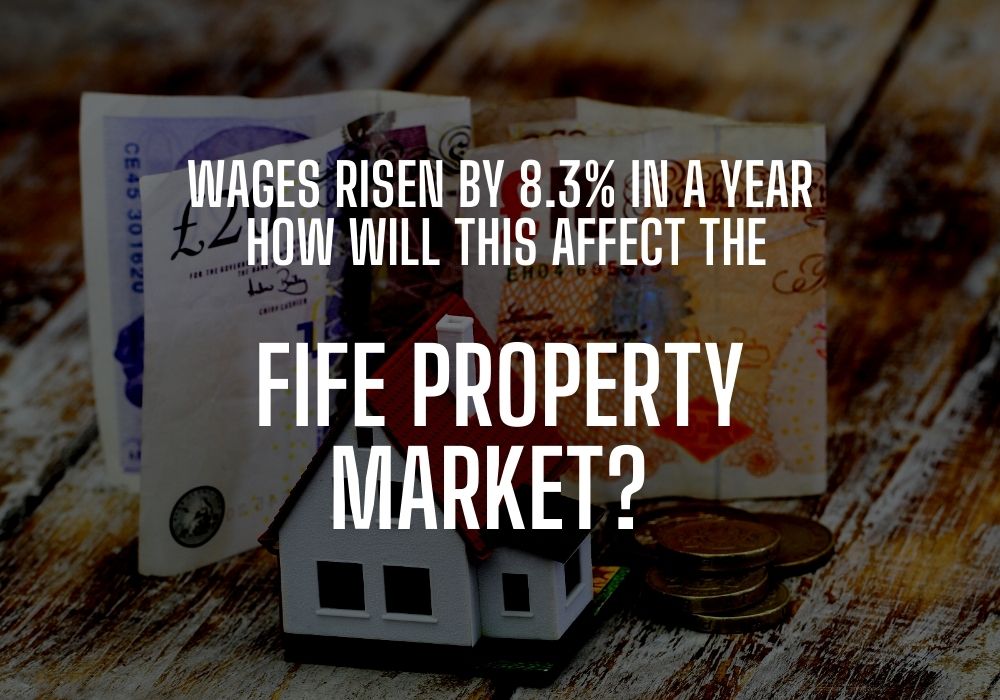 As they struggle to meet demand, Argos have had to increase the wages of their HGV drivers from £11.41 an hour to £15 an hour – a rise of 31.2% meaning their pay goes from £27k to £35k. Care home providers are offering signing-on bonuses of many thousands of pounds to entice nursing staff away from their competitors, and new homes contractors say labour costs are growing as the housing boom pushes up demand for bricklayers and joiners. Restaurant chains, coffee shops, blue-collar workers in factories and warehouses are seeing wages rise at an extraordinary rate.

The average wage for a worker in Fife in full-time employment is £579.20 per week (before tax).

We can all argue over the reasons behind it; some suggest the ‘B’ word (ending in ..xit), whilst others put it down to the pandemic and some the demographic changes of UK population.

So, before I look at what it could do to the Fife property market, let me look at why wages are rising. You will note all the above inflation wage increases are in blue-collar industries.

(Blue-collar workers refers to any worker who engages in physical or manual labour, such as building, hospitality, maintenance etc., whilst white-collar workers are those classed in the professions and service industries).

What are the reasons for these wage increases?

How could these wage increases affect the Fife property market?

White-collar wages, since the turn of the millennium have risen in real terms yet blue-collar wages have remained stagnant (although they started to pick up slowly just before the pandemic).

So, if all blue-collar workers are now seeing a substantial increase in their real wages since the pandemic what will this mean, especially for the Fife property market? It would mean the following …

3,465 Fife people have come off the dole queue in the last 12 months alone, reducing the unemployment rate by 2.0% to the current 6.6% in our local authority area.

Secondly, these pay rises will start to burn holes in people pockets. We should assume those people with the extra cash will spend it. In fact, it is a recognised trait in economics that blue-collar workers tend to spend a lot more of any increase in disposable income (when compared to white-collar workers). This would give a boost to the retail, hospitality, leisure and travel industries very quickly.

Fife rents are already 9.3% higher than 12 months ago,

and if wages continue to grow, then rents will increase even further. This is because rents in the private sector tend to rise in line with wages rather than with property prices.

This is excellent news for Fife buy-to-let landlords.

Next, if wages for blue-collar workers continue to grow, I believe we will finally see a long-term growth in home ownership again. In 2008, 68% of people owned their own home, yet that had been slowly reducing over the 2010s to 63% in 2018. Yet since 2018, this has increased slightly to 65%.

The Brits who had the biggest problem jumping on to the property ladder were not just the 20 somethings, but also middle-aged blue-collar workers. With blue-collar wages stagnant over the last two decades, and accelerating house prices, it was much tougher for them to save up a deposit for a mortgage.

Yet with the recent Government backed 5% deposit mortgages and more disposable income (because of the wage rises), some might decide not to spend the extra on going out and holidays and buy their first home instead (because most people want to own the place where they live – if they can afford it, they will buy).

Overall, if this increase in blue-collar wages is across the board, then this could be one of the greatest things to happen to the Fife property market in a long time.

It is certainly long overdue. Since the millennium, wages at the bottom end of the pay scale (i.e. blue-collar workers) have deteriorated, while the professional white-collar middle classes have done much better. The disparities between both classes/workers are both imbalanced and harmful to the economy and society as a whole.

But what is the real story behind the headlines?

One school of thought is that some fear these wage increases will fuel hyperinflation (and in turn, interest rates will have to rise to counter that).

Also, we have to remember a few things …

there are still 1.9m people on furlough (which stops at the end of September).

Not all of those people will go back to their original jobs, meaning they will need to find a new job, so the pay pressures could just as easily diminish as employment bottlenecks clear.

Also, the 8.3% wage increase is based on a year-on-year figure (i.e. a snapshot of now versus a year ago) and therefore the headline figures have been profoundly distorted by the large numbers of blue-collar workers on furlough in 2020 (i.e. they were on 80% pay). The Office for National Statistics have gone on record saying that, accounting for some of the distortions caused by the pandemic, real wages for blue-collar workers are more likely 3.5% up.

Finally, as with all things, the devil is in the detail. The newspaper headlines reporting the over inflated pay rises this spring are true. However, in truth (of course we all know bad news sells newspapers) these wage rises were focused on professions with specialist skills. For example, whilst wages for HGV lorry drivers have risen by double digits, pay rates for courier drivers have remained stagnant. At the same time, wage growth for white-collar jobs is almost at zero for yet another year.

To conclude, there are interesting times ahead for everyone involved in the Fife property market. I do not profess to know all the answers, however, I do have my own opinions. Whether you are a Fife first-time buyer, second-time buyer, homeowner, landlord or tenant and would like to pick my brains on any aspect to do with the Fife property market, please do not hesitate to drop me a DM, give me a call or send me an email.